All I have is my blog of love, and love is not blogging

Hello, Sunday! As you may have noticed, the story I’ve been promising for the last few weeks is still not ready. I’m trying things in the presentation I haven’t tried before, and getting those ready is taking longer than I thought. But, if you check back later this week…patience can be rewarded

After the cut…one of those “try something different” Sundays.
Over on Tor.com, Leah Schnelbach is doing a Studio Ghibli rewatch, She started it with Miyazaki’s two pre-Ghibli movies, Nausicaa (which may get a blog post of its own someday) and the Lupin III feature Castle of Cagliostro. This stirred memories of how a Miyazaki Lupin project has influenced my writing ever since I first saw it…but it wasn’t Castle of Cagliostro,
Shortly after that movie came out, Miyazaki storyboarded and directed two episodes for the second Lupin anime series. One of them was inspired by Miyazaki’s love of aircraft, and by failed 50s designs such as the Spruce Goose. It was called “Wings Of Death – Albatross”. This particular episode is not on YouTube, so you’ll have to settle for the Crunchyroll link; it’s also on Daily Motion. (Note: Brief, partial female nudity, and LOTS of ads.)
I remember going to a convention many years ago where they were showing some anime that, let’s just say, was newish at the time. I had heard about Lupin III, and the anime program for the day listed one episode to be shown – “The Combat Magnum Scattered in the Wasteland”, which they called “The Alexandria Gambit”. I liked it enough to stick around for the next episode, which was “Albatross”.
Even without dubbing or subtitles, the start blew me away. It was the comedy caper of my dreams, the James Bond/Chuck Jones mashup I never knew I wanted. And then, 16 minutes in when Lupin is in deep trouble and Fujiko realizes she has to save him,..she transforms into the biggest female badass this side of Emma Peel, except funnier. If you haven’t watched it yet, go. I just watched that scene again, and it still knocks me out. So to speak. 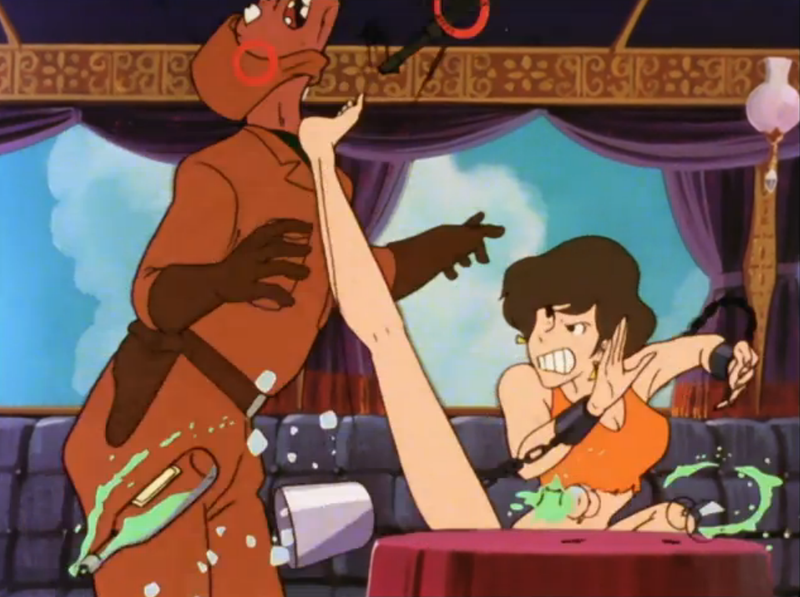 The biggest lesson I took from that scene? Not just that women can be badasses, but that they can hold their own with men…and in many cases do better.
So every time Michiko the Monkey Queen wisecracks her way through a fight…
Beth McGill comes up with a new trick and outwits an opponent…
Abby Main-Drake puts aside her doubts and fears and saves the day…
Annabel Skyblade comes back from impossible odds…
Even when Alice Peavley does something rash for the right reasons and still comes out on top,,,
It can all be traced back to Fujiko Mine in those glorious three minutes, all her cleverness and toughness and badassery and guff and heart…
And to Hayao Miyazaki.
Domo arrigato, Miyazaki-Sensei. 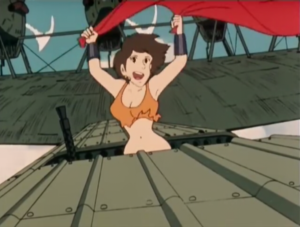