towards the blog you left so very far behind

Happy first Sunday catchup of 2016, everyone! Don’t forget that you only have until Wednesday to enter the Goodreads giveaway to win one of three signed paperback proof copies of Redblade, the new Monkey Queen novel! Good luck to all who’ve entered, and I’ll see you after the cut.

Yep, this week’s lyric is the first I’ve adapted from the works of the popular musical artist I’ve chosen for the Sunday catchup for 2016. I’m wondering how long it’ll take regular readers to figure out who I selected…but I need to be careful not to give it away too early, so no clues.

Sherlock: The Abominable Bride was…odd. Good, but odd, and Holmes is wonderfully snarky at times. I’ve been wondering how they’d explain the absence of the fictional Victorian Holmes in the modern setting, and I guess this does that, sort of, while also leaving you thinking about modern-day Sherlock being fictional in the Victorian Holmes’ universe…but I try to save that sort of thinking for Doctor Who.

2016 may turn out to be a good year for movies, which is nice considering it may not be such a good year in the real world. The two I’m looking forward to the most are Doctor Strange (one of my favorite comic book characters, and the Disney Infinity figure should be awesome) and Fantastic Beasts And Where To Find Them (new Potter-verse!), though Zootopia and Kubo And The Two Strings look promising. Have any of you European readers seen The Little Prince movie? Is it actually any good? If there ever was a book that would resist being made into a good movie, that might be it.

And finally: Princess Merida has been through a lot lately. It’s a good thing she’s found a new friend… 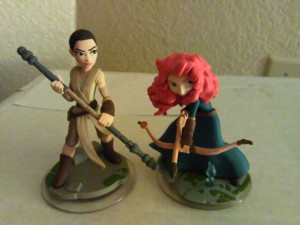