A request/reminder for Monkey Queen fans to start this Sunday catchup: If you’ve enjoyed Michiko and Beth’s adventures, please take the time to leave a review! People do pay attention to what other readers have to say about books they’re interested in. They’ll do the most good on Amazon, especially for any book after the first, but any review anywhere you want to post it will help. Don’t be shy! I appreciate all the support I’ve received so far from reviewers, and the readers you could be bringing in will appreciate it too. More, including another way you can help, after the cut.

Here’s some news: To tie in to several promotions in early May, the first Monkey Queen book, Of Introductions And Abductions, will be on sale for 99 cents (and marked down worldwide) as of May 1! The sale will run through May 21, maybe longer. I used Canva to design this ad; feel free to copy and share it! 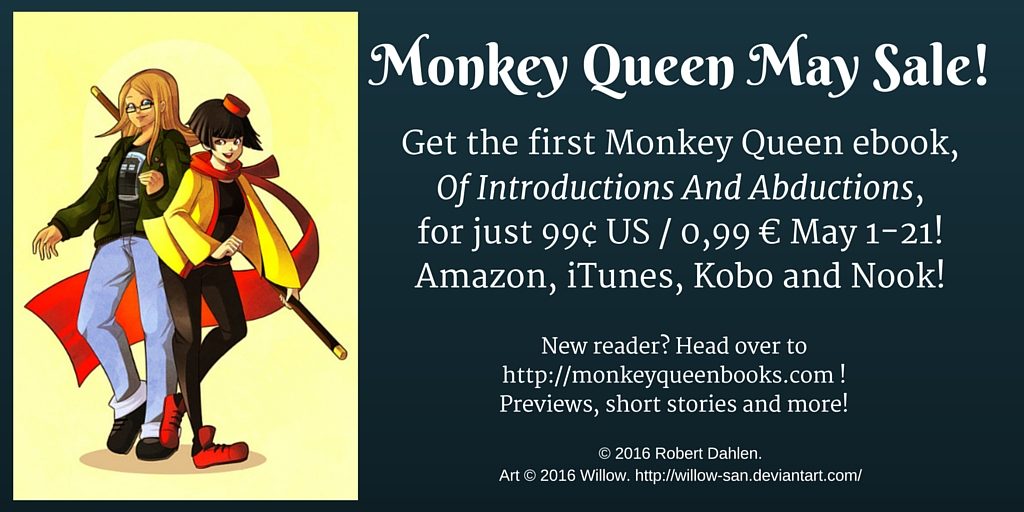 Work on the next book, The Crown Of Kylthena, is continuing. Slower than I’d like, but it is continuing. Darn real life getting in the way. And a flu bug – it was a nasty one, too. At its worst, I was spending half my time sleeping and the other half trying to get motivated to do something else before giving up and going back to sleep. For four days. I hate being sick. Anyway, I’ve finished writing a lengthy scene in the middle that was fun to do, and even if I need to rewrite three or four other scenes because of it, it was worth it.

Oh, and if you ever wondered, “spladap” is the proper sound effect to use when someone is hit in the face with a fish.

On to other subjects: One of my favorite sci-fi comics from the 1990s was Teri S. Wood’s Wandering Star. It had some cool characters, and Wood’s art was very nice (and very underrated at the time). I was happy to learn that Dover Comics will be collecting the series in a single hardcover, due to be released in June. You can preorder the book through Amazon, and find out more about the comic at the website, including how you can get a free sketch card!

I’ve mentioned the Shakespeare stick figure webcomic Good Tickle Brain before, and cartoonist Mya Gosling has outdone herself to commemorate the 400th anniversary of Shakespeare’s passing – she’s created a flowchart to help you decide which play you should see (or read) by the Bard of Avon. You can see it here, and if you’re not reading Good Tickle Brain, start now! Forsooth!

And if you’re one of the seven people who haven’t seen this, here’s our introduction to the new companion in Doctor Who, Bill. I like her already.