Welcome to Willow Wednesdays! Featuring art by Willow, the cover artist for the Monkey Queen series, with her kind permission! Read on after the cut for more! END_OF_DOCUMENT_TOKEN_TO_BE_REPLACED

Sunday catchup! Sorry for the lack of posts this week; life gets in the way sometimes. Normal service should resume this week. After the cut…nerd music stuff, including a concert review! (Warning: Lots of photos, links and videos ahead.) END_OF_DOCUMENT_TOKEN_TO_BE_REPLACED

So today marks two years of the Monkey Queen. The anniversary sale is still going on, and I suspect that I may forget to reset the prices for a day or two. (Birthdays will do that.) If you want to grab the first three books, search your favorite ebook store, or scroll down to find the Amazon link.

But I wanted to touch on the important thing: To thank you. There’s a more detailed post on Facebook, but I wanted to thank all you here as well. The readers, the reviewers, the fans, the inspirations, those who help with getting the books out, those who cheer me on and cheer me up when needed…I will always be grateful to you. Thank you, one and all.

Those of you on the mailing list may have already seen these, but if you haven’t: Here’s another sneak peek at the sixth Monkey Queen book, The Crown Of Kylthena. Here, Alasdair Stirling is in a bit of a hurry.

Alasdair pushed his way past a group of surprised dwarves as he ran up to the car. “Good afternoon!” he said pleasantly to the conductor, a wyrdra with an impressive set of bushy whiskers, as he boarded.

“What’s this all about?” The conductor glared at Alasdair.

“Just getting two more aboard…there we are!” Alasdair said as Michiko and Beth ran through the door. “Now we can go.”

“Yes, yes, I’m sure you do.” Alasdair rapped the car door with his cane.

“This—this is highly irregular!” the conductor sputtered as the door slammed shut.

“I know.” Alasdair smiled as he reached behind the conductor with his cane. He tapped the control panel. “Isn’t it delightful? Hold on, everyone!”

The car wobbled as the crystal-powered engine sparked to life. Beth swayed as the car started down the cables. As it left the terminal building, it lurched as the ground fell away below it. Beth saw the metal inlays along the car’s wooden frame; as they glowed, she realized that they were aerium, the same metal that kept Faerie’s airships aloft.

“Why are you hijacking my cable car!” the conductor said with a scowl.

“Such a strong term,” Alasdair said. “We had a matter of some urgency.” He pointed at Liem. “My young friend has an important engagement she dare not be late for.”

“Well…technically, it’s a big date,” Alasdair stage-whispered. “He’s apparently quite attractive.” He winked. Liem buried her face in her hands.

And even though this book is basically finished, work has started on the seventh book. Here’s the very first sneak peek:

“In these woods?” Skoja nodded towards the trees that surrounded them. “There’s no one else around, is there?”

Channi started to speak, but stopped as branches in nearby trees rustled and shook. The chimri stopped and watched quietly, mouths open, as a gold-tipped wooden staff flew towards them. It stopped several feet away, floating motionlessly in mid-air.

“Skoja?” Keren said slowly. “What have we told you about tempting fate?”

I hope you enjoyed these. Thanks again for all your support. Stick with Michiko and Beth; there’s still lots of adventure to come!

You may want to be dropping by again in early October. [grins]

Filed under thank you

Tagged as sneak peeks, thank you 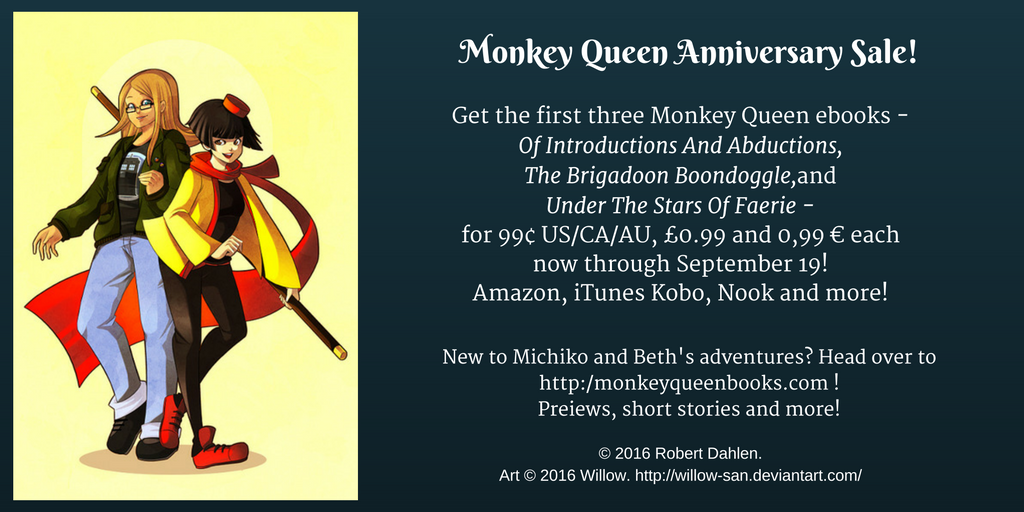 END_OF_DOCUMENT_TOKEN_TO_BE_REPLACED

The Anniversary Sale is on!

This coming Monday, September 19, marks the second anniversary of the official debut of the first Monkey Queen book. To celebrate that, you can get Michiko and Beth’s first three adventures for just 99 cents US each!

Start with the first book, Of Introductions And Abductions, where Michiko and Beth first team up to rescue a kidnapped friend. In the second book, The Brigadoon Boondoggle, they have to stop a conflict between Emigres while unraveling a real estate scheme gone bad. And in the third, Under The Stars Of Faerie, they face a deadly assassin and a mad gremlin and team up with airship pirates!

If you’ve never read the Monkey Queen books before, this is the perfect time to start! If you’ve read the first, catch up now on books two and three! And ebooks make great gifts! Click here to buy from Amazon, or search your favorite ebook retailer for “Monkey Queen”!

This sale ends Monday, so don’t miss out! Thanks for your support, and I hope you enjoy the books!

Find out what the round-headed kid got himself stuck in…after the cut! END_OF_DOCUMENT_TOKEN_TO_BE_REPLACED

Welcome to Willow Wednesdays! Featuring art by Willow, the cover artist for the Monkey Queen series, with her kind permission! Read on after the cut for more! END_OF_DOCUMENT_TOKEN_TO_BE_REPLACED

still too busy singing to put anybody down

50 years ago today, and hopefully not lost in the deserved celebration over Star Trek’s debut, another show that would leave its mark for years to come premiered. Take a look at Michiko’s favorite band…after the cut! END_OF_DOCUMENT_TOKEN_TO_BE_REPLACED

Tagged as The Monkees

Sunday catchup time! Next week will mark the two-year anniversary of the official debut of the first Monkey Queen book, Of Introductions And Abductions, and there will very likely be a soppy blog post on the 19th. But there may also be a sale…so stay tuned! More after the cut. END_OF_DOCUMENT_TOKEN_TO_BE_REPLACED

Willow Wednesdays: be sure to wear some stars in your hair

Welcome to Willow Wednesdays! Featuring art by Willow, the cover artist for the Monkey Queen series, with her kind permission! Read on after the cut for more! END_OF_DOCUMENT_TOKEN_TO_BE_REPLACED