blog you till Tuesday

Sunday catchup is back! One of the reasons that I skipped last week’s, besides the complete lack of news, was that it was the Sunday I finally replaced the old Windows 7 laptop that no longer wanted to download updates or display web pages properly. Oh, and the “5” and “6” keys no longer worked. I’m still getting this new laptop up to speed – for one thing, half my music files need to be moved over – but it’s a vast improvement and will hopefully speed up all the aspects of the writing game that don’t involve the actual writing. More after the cut!

After a brief break, one of my favorite French cartoonists, Calomiel, is back in action! If you haven’t dropped by her blog, do so and check out her cartooning; I’m fond of this recent post in which compares herself to the Grinch. Just…don’t ask her about the Sherlock season premiere yet. Maybe never.

This next one is not for the kiddies: The Misbehavin’ Maidens, a delightfully bawdy quartet, have launched a Kickstarter campaign to finance their second album! They make fun, inclusive, sometimes nerdy and often naughty (in a good way) music that will make you blush when you hear it on your iPod in public. (I speak from experience.) Check out their website for more!

Some happy news: My friend, and Monkey Queen fan, Amber Goss hit her funding goal for her GoFundMe campaign! She’s in the middle of her winter term class and working on her graduate school application. Thanks to everyone who helped! You can still donate if you’d like, if only so she can afford better everyday food and the occasional cheesy fries,

Finally: I don’t discuss my occasional forays into Magic: The Gathering often, but I’m making a big exception for this new character who has two cards in the upcoming Aether Revolt set: 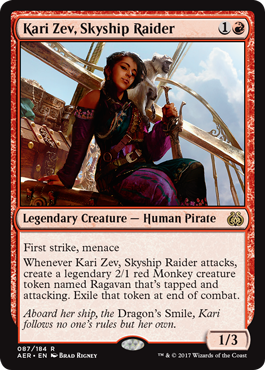 An airship pirate girl captain. With a pet monkey. And the monkey has goggles. Best Magic card ever. 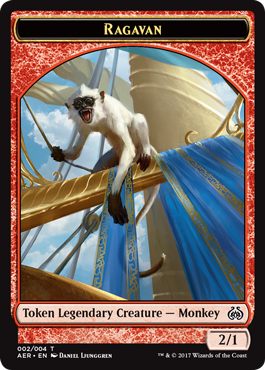 If anyone from Wizards of the Coast are reading this: [clears throat] You know, I’ve written stories with airship pirates before. Just sayin’. 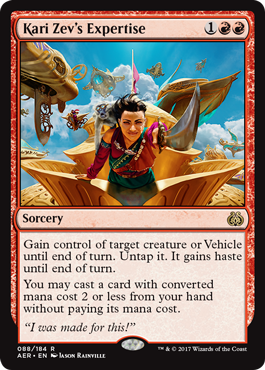