Last week, the Doubleclicks released a video to go with a new acoustic version of their song “Wonder”, to celebrate the new Wonder Woman movie. They asked their fans to help, and I chipped in; you can see me at the 2:17 mark. (Or fast forward past it…) Do watch this; there are many remarkable people in this video, and I’m honored to be a small part of it.

I’ve mentioned Madame Askew and her Temporal Entourage before, and one of the members could use some help. Jasmine Gordon needs to raise funds to pay for training for a service dog to help her with medical difficulties, so she’s started a GoFundMe campaign. I know times are tight for many, but if you could help with a share or a donation, I’d be grateful and so would she. Many thanks.

All right, time for Clockwork Alchemy photos! First, me on Saturday. My hat was missing a key component at the time, but you’ll see that later. The outfit wasn’t quite steampunk standard, due to budgetary restrictions, but I’ll be working on it for future cons. 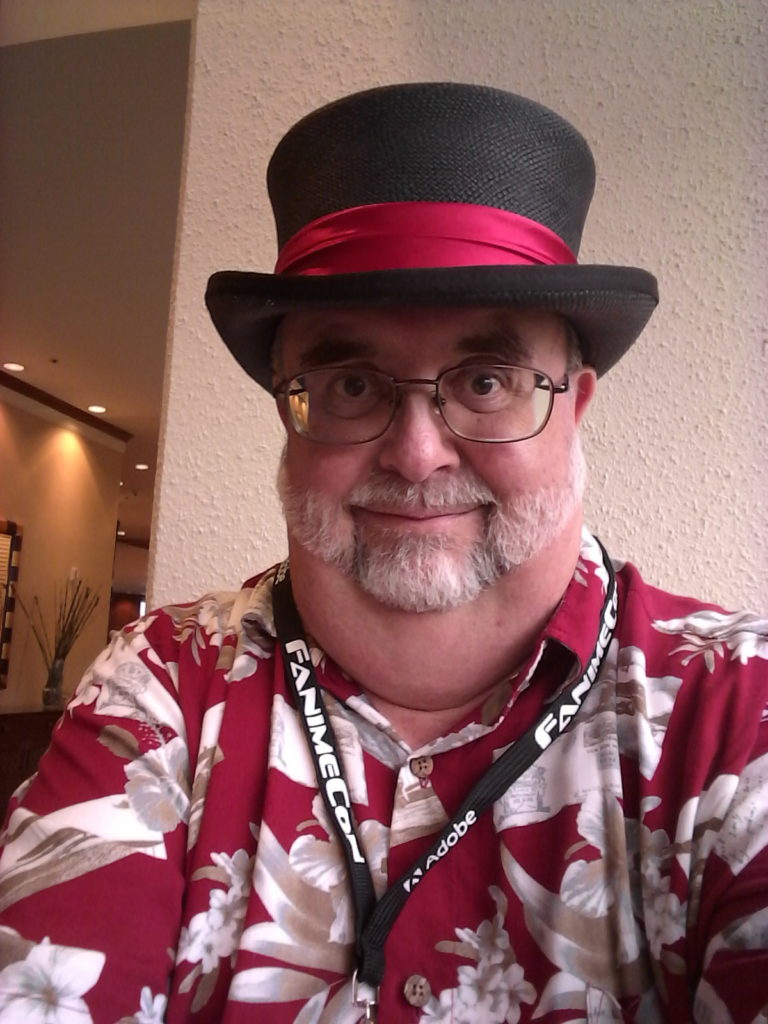 Madame Askew (a.k.a. Jocelynne Simone) in her Saturday splendor! She hosted three panels, including one about the history of tea and one about Victorian undergarments, both of which gave me ideas to work into stories. 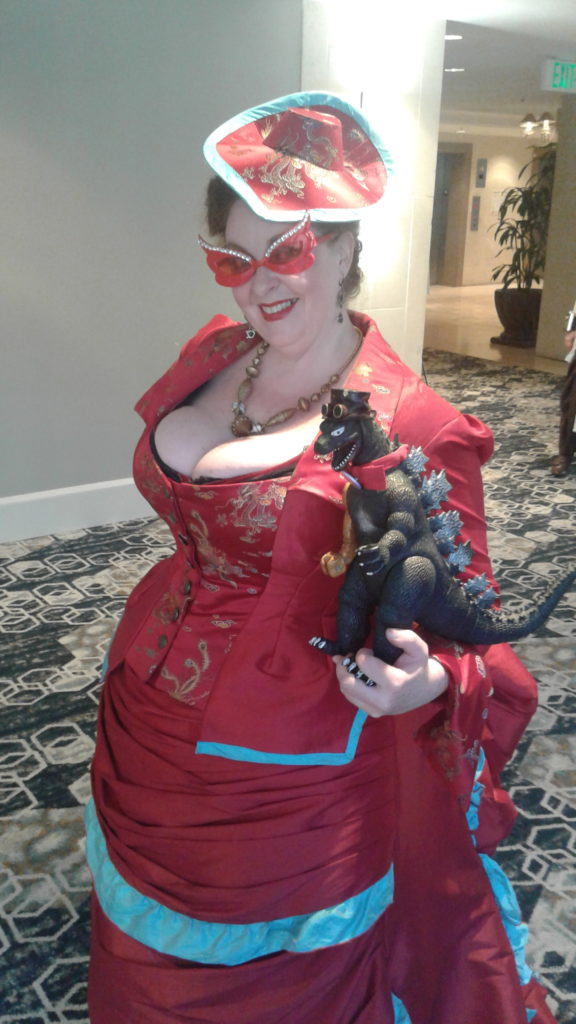 Hide your citrus! The Lemon Pirate (a.k.a. Evie Betz) has arrived! She assisted Madame Askew on some of her panels when not plotting to steal everyone’s limes. 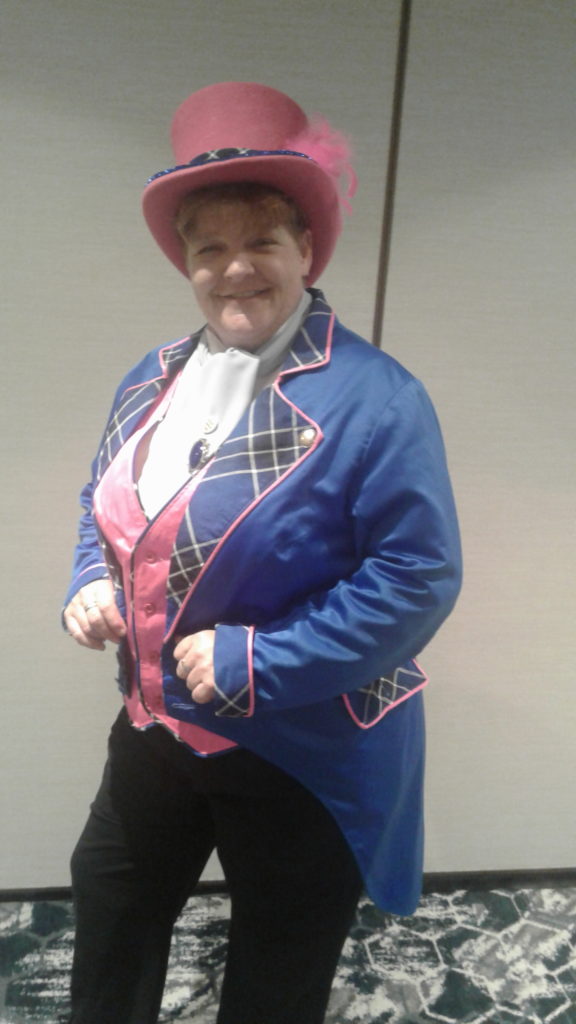 Strangely, a Seattle-area musician who put on quite a show on Saturday. 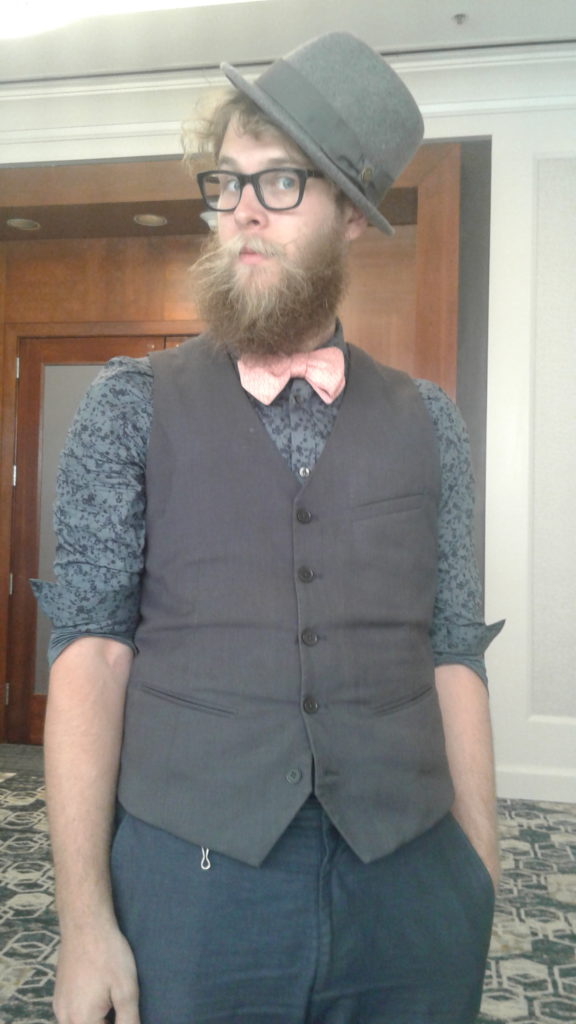 Me on Sunday, The goggles were a gift from the Lemon Pirate and Madame Askew, and the touch the hat sorely needed. Thank you two again! 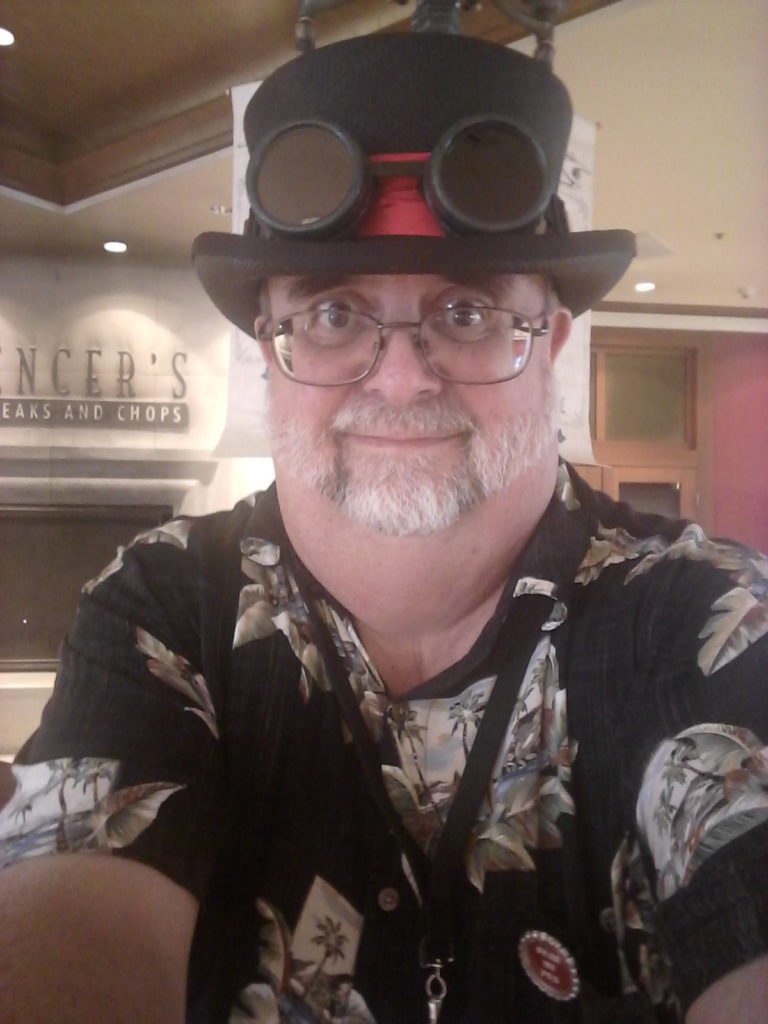 Madame Askew had a new outfit to premiere on Sunday! She calls it “Pearl Grey”. 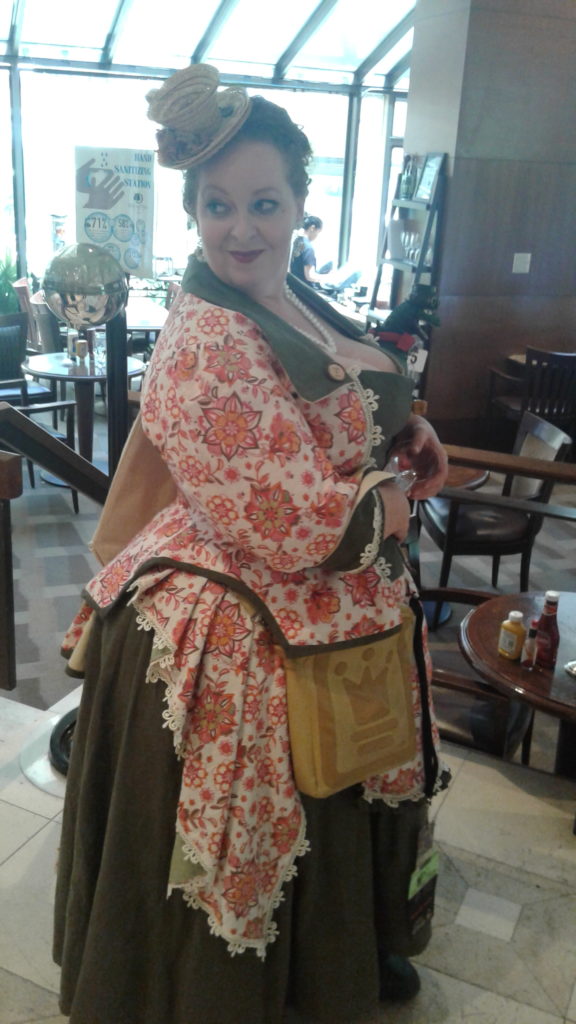 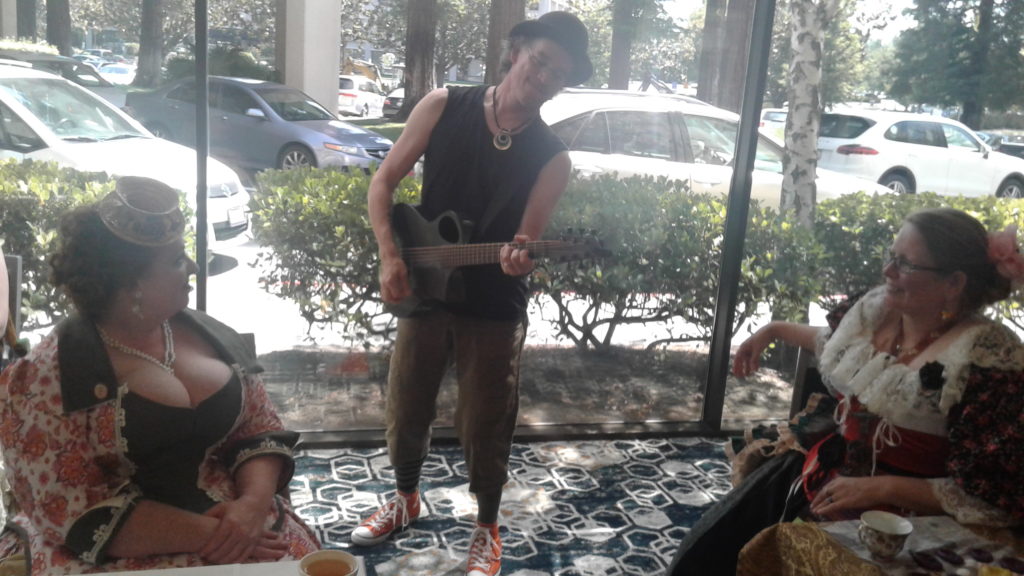 My haul of goodies from the con. The book is an anthology I look forward to reading, the envelope has download codes for Strangely’s albums, and the tea bag was a souvenir from Madame Askew’s first Saturday panel. 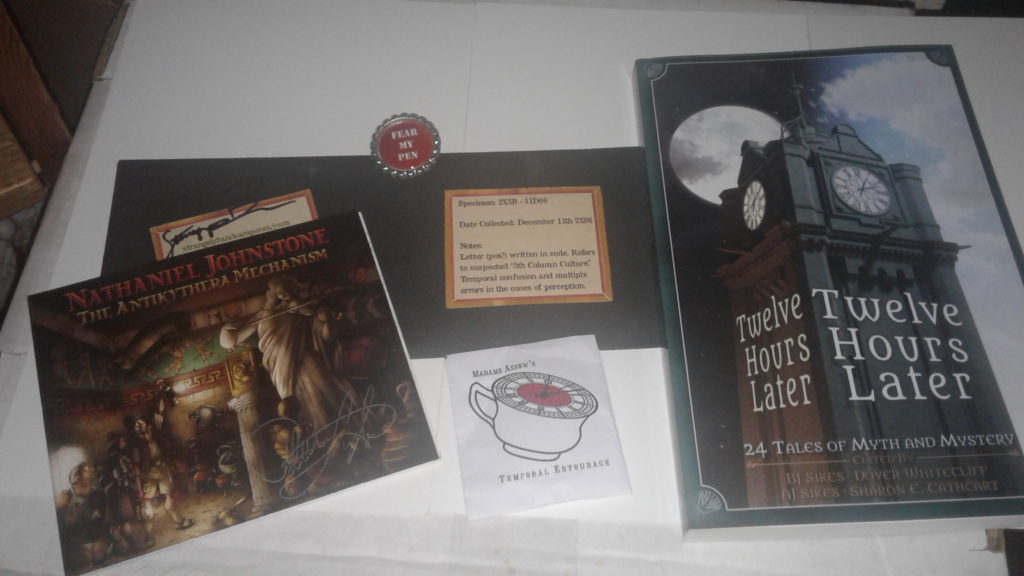 The tea bag has a new home… 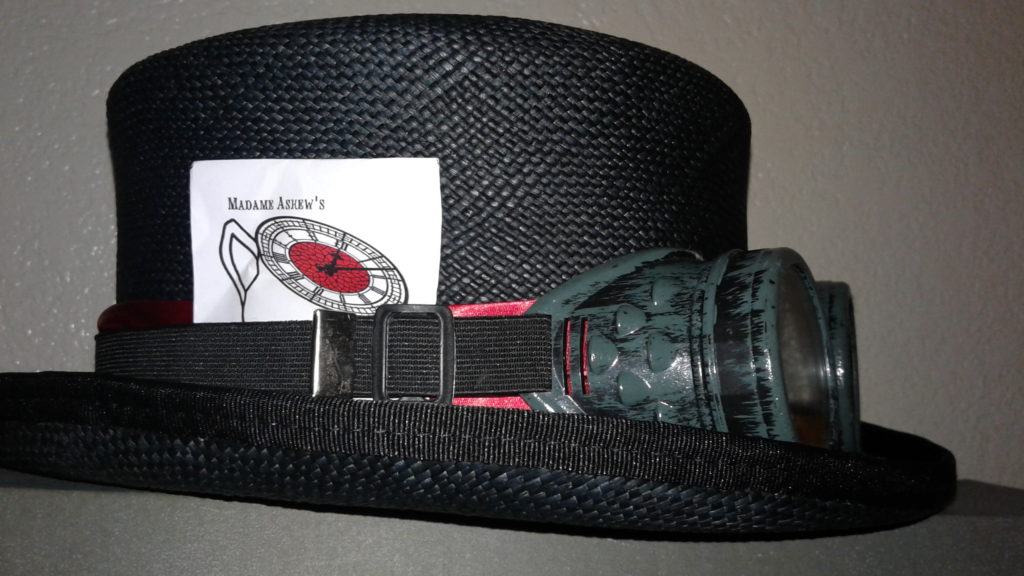 It was my first steampunk convention, and I had an absolutely splendid time! I look forward to attending more steampunk conventions in the future! Thank you to Madame Askew, the Lemon Pirate, the staff and volunteers, and all the marvelous people I met there! 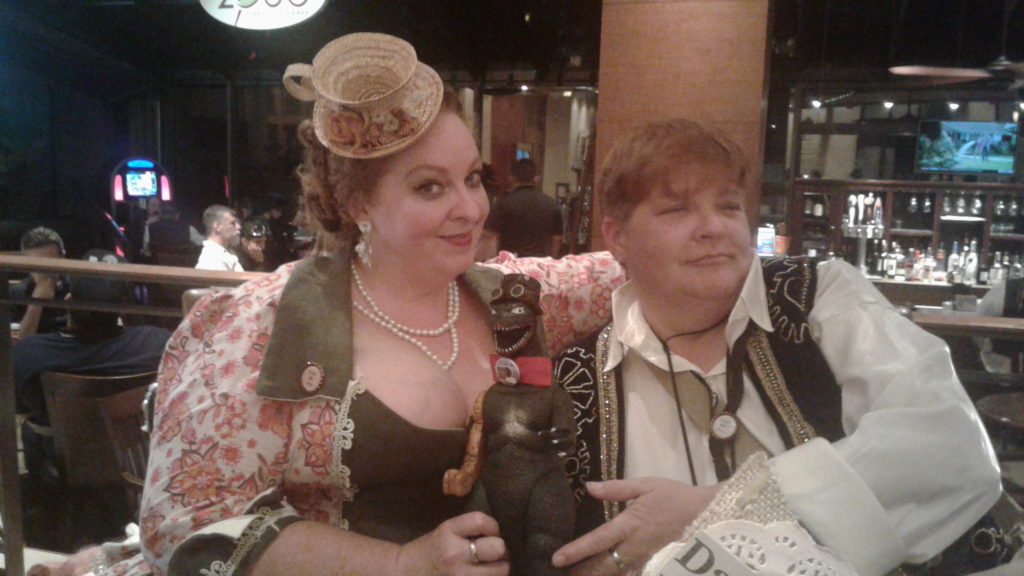 Until next time, cheers! 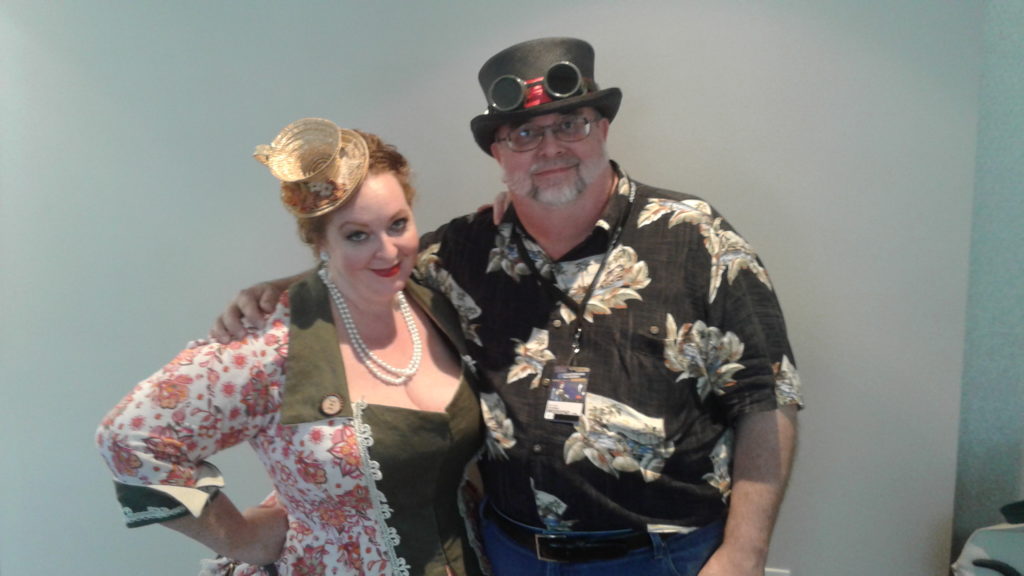