A Splendid Solstice! (A Peavely Manor short story, of sorts)

Last year, I was invited to contribute to a holiday-themed newspaper that was distributed by PDF to members of the Patreon for the splendid Madame Askew. I wanted to write a Peavley Manor story, but I decided to take a different approach – since this was for a newspaper, I wrote it as a newspaper article. So, here’s Alice’s first Christmas / winter holiday in Darbyfield, as written up for the Emerald Dell Courier.

Our thanks for Madame Askew for her support for this, and many other, stories. Do consider backing her Patreon, if you would, at www.patreon.com/madameaskew

This last Saturday, Darbyfield hosted its annual Christmas and Winter Holiday Jubilee and Wassail. It was expected to be an entertaining and festive celebration, and even with some surprising twists and turns, it certainly did not disappoint.

Most of the communities of the Emerald Dell, and indeed the Crescent Sea, celebrate the Yuletide or the Winter Solstice at this splendid time of year. When Darbyfield first emerged following the Great Relocation, its populace shared their tales of an unfamiliar holiday which took place at around the same time as those, and shared many of the same traditions. Those holidays blended together, and a Christmas celebration took place in Darbyfield that winter, and every winter since.

The committee in charge of organizing this year’s Holiday Jubilee wanted to avoid a repeat of last year’s, when Professor Rigby P. Holsapple was the host. While the Father Christmas automaton that the professor showed off was an impressive creation, its built-in roasted chestnut launcher left a bit to be desired in terms of aim; many of the businesses around the town square spent the next day cleaning up broken glass. A different approach was called for.

This year, the committee was presented with an obvious choice for host. This newspaper has reported quite thoroughly on the arrival of Darbyfield of Alice Peavley, the heir to Peavley Manor, and her many adventures since. The committee asked Ms. Peavley to host the Jubilee; she readily agreed, and joined in the planning with the same energy she has brought to many other events.

Ms. Peavley was in high spirits as the Jubilee began. She was dressed splendidly, in a full-length powder blue coat trimmed with white faux fur over a kelly green winter gown. She happily mingled with the crowd, handing out small treats to the children. As always, she was accompanied by her valet, Mr. Macalley. The esteemed gnome wore a black suit and greatcoat, and on his head – at the urging of his employer – was a red Father Christmas hat, again trimmed in white.

It was a perfect day for a holiday celebration, clear and not excessively cold. The children of the Emerald Dell had many entertainments to choose from, including games, singalongs, storytime with librarian Ms. Clarinda Topping, and a petting zoo featuring animals from Mr. Vic Ray’s farm. For the adults, there were roving entertainers, delectable foodstuffs, and hot tea, cocoa, and toddies (the latter were, per Ms. Peavley, of the highest quality).

After several hours, the attendees turned their attention to the stage that had been set up by the large pine tree in the town square. It had been decorated with strand after strand of tinsel and numerous sparkly baubles, and it was topped by a beautiful five-pointed star. Ms. Peavley was called upon to flick the switch that would activate the enchantment that Mx. Aurielt, our resident wizard, had cast upon the star, casting brilliant light throughout the square. The audience froze as Ms. Peavley reached for the switch, no doubt recalling last year’s Jubilee, when Professor Holsapple’s reindeer tree-topper launched itself into the hot cocoa stand, pelting the onlookers with marshmallows. Such was not the case this year; Mx. Aurielt’s enchantment worked as promised, and the crowd cheered at the sight of the illuminated tree.

Next on the program was the lighting of the ceremonial Yule log in front of the tree. The torch had been carried from the Elfking’s palace to Darbyfield, and was handed off to that doughty constable, Alf Matterhorn, by Arbora Hillrose of the Consulate, to cheers from the crowd.

A flurry of chaos erupted after the handoff, caused by the sudden appearance of Beauregard, the official bloodhound of the Darbyfield Constabulary; reports say that he was chasing one of Mr. Ray’s goats, who had slipped through a half-closed gate. Constable Matterhorn had to dodge to escape being trampled by goat and hound, which led to him juggling the torch, which led to his winter coat being set ablaze. Thankfully, the day was saved by fast action from Mr. Macalley, who removed his Father Christmas hat and used it to beat out the flame, with no damage to the Constable’s person and further cheering from the crowd. The hat was not as fortunate, and Mr. Macalley used that as an excuse to tuck it away and slip a plain black cap upon his head, much to Ms. Peavley’s visible disappointment.

Beauregard was soon gathered in, the Yule log was properly lit, and the musical portion of the program began. Holiday music has always been a highlight of the Jubilee, and this year was no exception. The chorus from Darbyfield University was in fine form, Mr. Ridley Talbot fiddled holiday jigs that led some in the crowd to dance, and Ms. Maya Fizkin of Withers’ Farm surprised and moved many with a stirring rendition of “On This Long Winter’s Eve”.

A touch of peculiarness was added to the proceedings by Mr. Eldric Bludergard and his valet, Mr. Stibbins. The duo teamed to sing an original composition by Mr. Bludergard, “Ollie, The Lonely Christmas Orange”. Their performance, which was earnest if not entirely professional, was capped by them conducting a dance called “The Peppy Pip Polka”. They described their act as a “zesty toe-tapping entertainment!”; at least one person in the audience opted to describe it as “mercifully brief” instead.

Following Bludergard and Stibbins the itinerant pooka, Mr. Reginald J. Cheshire, came on stage to tell jokes and stories of the season. His tales were met with favor from everyone in the audience except for a pair of farmers, Mr. Jonah Harrisburg and Mr. Shilo Ogden, who interrupted Mr. Cheshire with some catcalls and “witty” asides. Their chortles were interrupted when an unexpected blanket of snow landed upon their heads. The farmers blamed each other for the chilly bounty, and had to be dragged apart and away before they could start another snowball fight similar to the one that disrupted the Jubilee the year before last. Mr. Cheshire continued his storytelling, with a wink to the crowd.

The Jubilee concluded with Ms. Peavley leading the musicians and the audience in a hearty version of “Sweet Solstice Time”. She then wished all the happiest of holidays, and we can think of no better way to conclude this account than to do the same. To all our readers – a Blessed Yule, a Pleasant Winter Solstice, a Merry Christmas, and Happy Holidays!

© 2021 Robert Dahlen. All rights reserved, except those permitted by your local jurisdiciton.

Thanks for reading. I’m honestly not sure when I’ll be posting here again, but I’m glad I get to share this with you. I hope you enjoyed it.

Tagged as holidays, Peavley Manor, short story, where the heck has he been?

Book Fair Frenzy (Or, Macalley Turns The Page): A Tale Of Peavley Manor

It’s here at last! Meet the irrepressible Alice Peavely, the imperturbable Macalley, and Alice’s friends and rivals in their debut novelette, Book Fair Frenzy (Or, Macalley Turns The Page)! 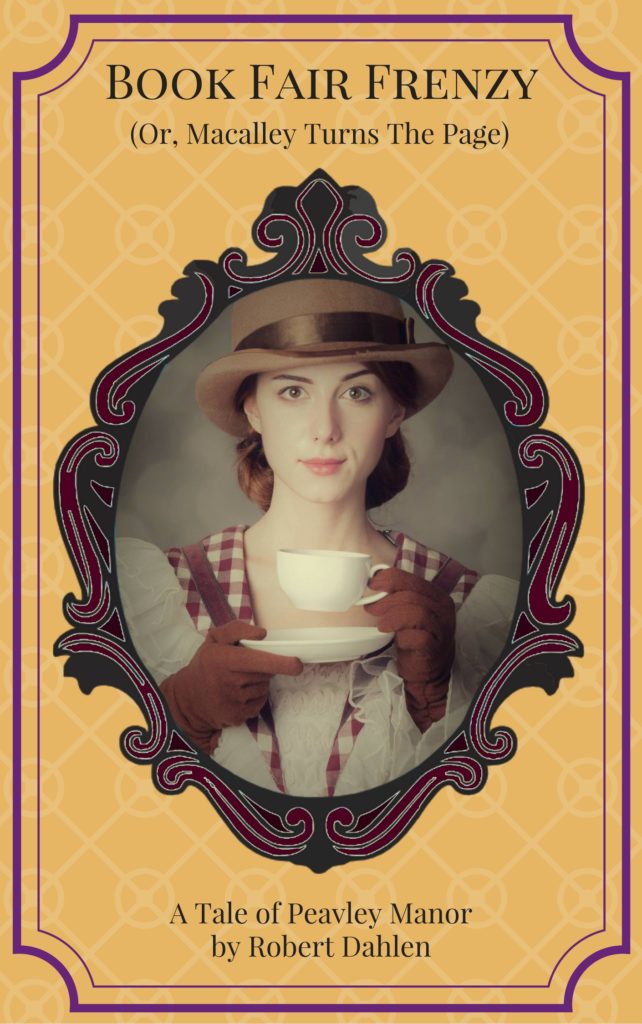 I’m going to do something a bit different here…

You can click “Continue Reading” and read this for free, after the cut…

Or you can help support my work and spread the word by buying a nicely formatted and ready for your tablet or phone copy on Amazon! Click here for the US link, or search your local Amazon store.

Do whichever you like, and do it without guilt. I’m fine either way. (And doing both wouldn’t hurt!) But please, please, spread the word. Review, retweet, share the Facebook post, blog, mention it to friends over a hot cup of tea, whatever works for you.

And enjoy! I had a lot of fun writing this, and I hope you have as much fun reading it. END_OF_DOCUMENT_TOKEN_TO_BE_REPLACED

Here’s the surprise I promised for the 450th post on this blog: A new short story! It features Henrietta Honeycutt and Duncan Wizansky, two characters who debuted in Redblade (needless to say, there are spoilers ahead). It’s a slice of life story, much like “That’s Amore”, and there’s only a little magic…unless the magic in the human heart counts.

If you like this, feel free to leave a comment or drop me a line, and you’re welcome to share the link all over social media! Spread the word! And read on…after the cut. END_OF_DOCUMENT_TOKEN_TO_BE_REPLACED

It’s almost Valentine’s Day! To mark the day, after the cut is the premiere of a new Monkey Queen short story, “That’s Amore!” Be warned: There are spoilers, especially for the endings of A Tiding Of Magpies and Redblade. END_OF_DOCUMENT_TOKEN_TO_BE_REPLACED

The Troll And The Garter: A new short story!

Here’s the New Year’s Eve surprise I promised: A new short story! This one has major spoilers for Redblade, so be warned, and read on after the cut! END_OF_DOCUMENT_TOKEN_TO_BE_REPLACED

It’s the unofficial start of the holiday season! To celebrate, here’s “Best Christmas Ever!”, a short story about Michiko and Beth’s first Christmas as roommates! This was originally posted in 2014, but for reasons detailed in the post below this, I’ve revised and expanded the story. Hopefully, this will make your holidays a bit happier! Read on, after the cut!
END_OF_DOCUMENT_TOKEN_TO_BE_REPLACED