This is a page for Monkey Queen things that really don’t fit onto any other page. They’re not essential reading, but they’re fun nonetheless.

YA Spring Fling Interview: Early in 2015, I was interviewed by fantasy author Sarah Dalton as part of a blog hop for a book promotion. The interview appeared on a third web site, but it was truncated, so I ran the original uncut interview after the promo had ended. 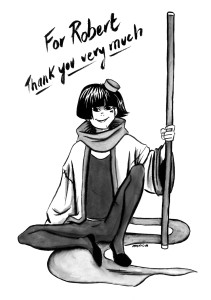