Tag Archives: no I still haven’t forgiven anyone for the previews

So my Disney Infinity shelf expanded a little: 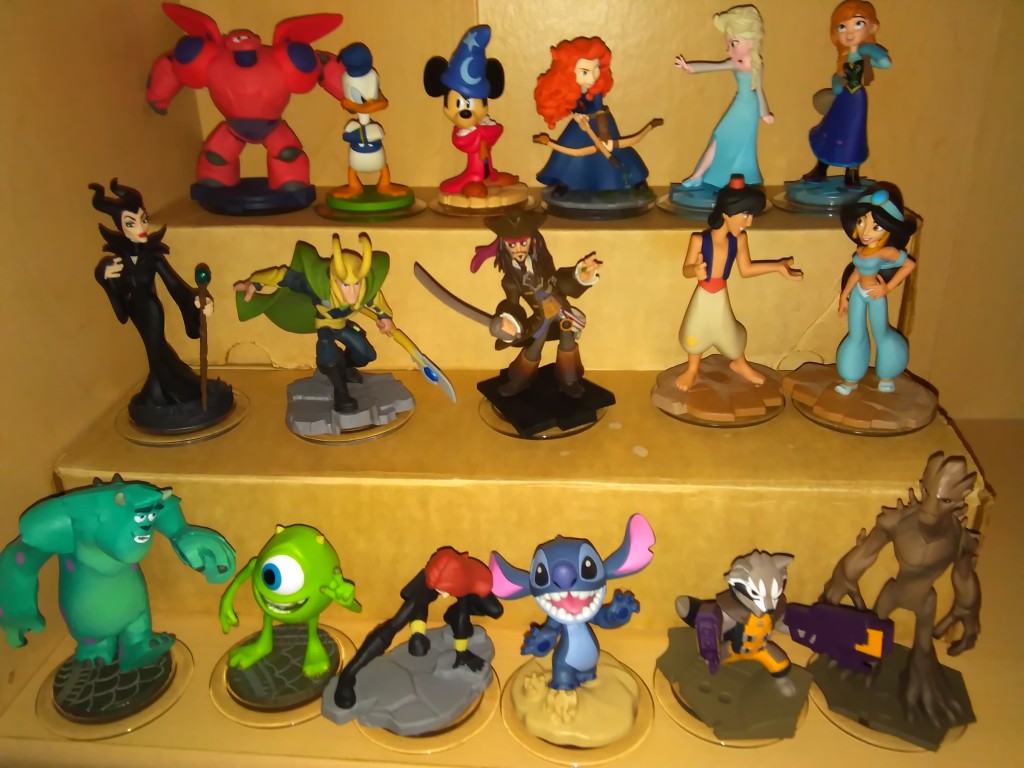 It’s tough to resist when there are so many figures out there I want, and I need to add to my Amazon order to hit $35 for free shipping. Which means that I need now to get a Hiro to go with my Baymax.

3.0 starts hitting the shelves in the next few days.  It’s not so bad right off, because the only figure I really want from the first wave is Yoda. (Minnie Mouse would be nice too, yeah, but she can wait. Sorry, Mickey.) But October (well, September 30) brings all the Star Wars figures from the original trilogy, so that’s five more I want right there, plus Mulan later on.

And since I started late, I’m now looking at the prices going up for the 1.0 figures I need. I have an emergency workaround for Violet and Rapunzel, but that still leaves Barbossa, Jack Skellington, two Incredibles and maybe the Toy Story crew. And I still want a couple of 2.0 figures besides Hiro, namely Captain America and Tinkerbell, and isn’t that a team-up we all want to see?

What it all means is that, darn it, Yoda and Chewie and the rest may have to wait until I fill in the holes. Which with my limited budget will probably mean that by the time I can get to them, they’ll start going up in price as they get discontinued with the rollout of 4.0.

I saw that Disney decided on Peter Pan as their “ToyBox” selection for 3.0. I suppose I should be glad that Tinkerbell has someone to play with, but I’m also a bit disappointed. So many great characters, ones that would make awesome sculpts, are being overlooked at this point. I know that Disney needs to focus on the new releases, and that not everyone is into classic Disney. But it wouldn’t have taken much to make me happy. Just a Jafar. Or a Darkwing Duck. Or even a Basil of Baker Street…

I also saw that Jar Jar Binks is showing up in the game. Is there a Toy Box minigame where we get points for kicking his butt? You should get extra points if you come up with a creative way to waste him, like having Baymax or the Hulk throw Stitch at him, or if you pound him into Jar Jar paste with as many different characters as possible. Which might get a bit tricky with Minnie or Olaf, but I’ll figure out a way.

Hey, don’t forget that if you like reading these posts, leave a comment and let me know what you think. And if really like these, or want a creative way to support or thank a hard-working writer, head over to Amazon and check out my Disney Infinity Want List. Especially with my birthday coming up in a few weeks. Hint hint.

Tagged as Disney Infinity, no I still haven't forgiven anyone for the previews