Tag Archives: Of Introductions And Abductions

Behind the Scenes: Of Introductions And Abductions

It’s Monkey Queen anniversary week! We’ll be celebrating all week with a look behind the scenes at all four Monkey Queen novels and much more, starting with the first book, Of Introductions And Abductions!

I’ve told the story before, but I’ll summarize it here: I originally created Michiko, Beth, and many of their friends and foes for a proposed comic book series many years ago. I rediscovered the work I had done on it in March 2013, and the basic plot for the first story translated from comic to prose nicely.

I know the Monkey Queen books are shorter than many, but I’ve always tried to get them up to 40,000 words or more. To do that for this first book, I ended up adding an entire chapter, which wound up as Chapter Seven. I’m glad I did; as it turns out, it was the perfect time to show Michiko doing something heroic. And her line when the troll threatens to eat her and the baby – “Oh, I am so not buying your diet book” – is one of my favorites in the whole series so far.

One example of how things can evolve as you write a story: In the Wonderland scene, I decided that I needed a character to help explain the Puck-Wrexham relationship. So, I worked up this quiet faerie with her nose in a book. Then, I needed someone to put the Jakes in their place. Then, I realized how well she played with Windsor. And by the time I got to the climax, Scylla had gone from mousy bookworm to exiled rebel. Someday, I hope to expand on that more; there’s a lot of her story still to tell.

Favorite Reference: When I decided that Michiko’s ring tone HAD to be a Monkees song. I would never have forgiven myself if I didn’t.

Most Obscure Reference: There was a restaurant in San Francisco my pal Barry and I went to in the 1980s for breakfast a time or two. Instead of hash browns, their potato side was big pieces of spuds fried with onions and maybe peppers. They were called…”Hot Potato Chunkies”.

How to subtly tie things together: Robyn’s reference to Wrexham persecuting the spriggans was added at the last minute, after I’d finished the first draft of the second book. And when I redid a certain scene in Chapter Two, I was able to sneak in an early reference to Beth’s love of airships.

Did you know: Although “Curse of the Werecorgi” is set after Under The Stars Of Faerie, it was technically the first Monkey Queen story to be published. It was mostly written as a parody, but the last scene, where Beth gets to totally geek out, is one that still makes me grin. Oh, the author’s name “Rosie Darniels”? This story was written a month or so after John Travolta butchered Idina Menzel’s name at the Oscars. Some wiseacre created a “John Travolta Name Generator” soon after that. Guess what name came out when I typed “Robert Dahlen” in there? Anyway, if you’ve never read it for some reason, click here, or use the “short stories” tag to read them all!

Tuesday: The con is on!

Tagged as anniversary week, Of Introductions And Abductions

The Monkey Queen smiled. “I need you, Beth. How would you like to help me save the world?”

Beth had not expected to hear that. “M-m-me?” she said.

Beth stared at Michiko. She saw the scarf drifting in the evening breeze, Michiko’s smile, the excitement and joy in the Monkey Queen’s eyes. The geek girl part of Beth stirred, the part that wanted to chase Golden Snitches, stand with the Browncoats, ride on the Catbus, the part that wanted to take the wheel of an airship and set a course for the second star to the right. And that part almost said, When do we start?

The Summer Sale is nearly over! If you haven’t read the first Monkey Queen book, Of Introductions And Abductions, it’s on sale for 99 cents US, 0,99€, £0.99, and other reduced prices on Amazon through July 15! We’re now available only on Amazon, for Kindle devices and apps, and part of Kindle Unlimited, so KU members (and Amazon Prime members with Kindle devices) can read all four Monkey Queen books for free! Just search your local Amazon or Amazon.com for “Monkey Queen”!

Remember – the sale on Of Introductions And Abductions ends July 15! Look for this cover, with wonderful art by Willow! 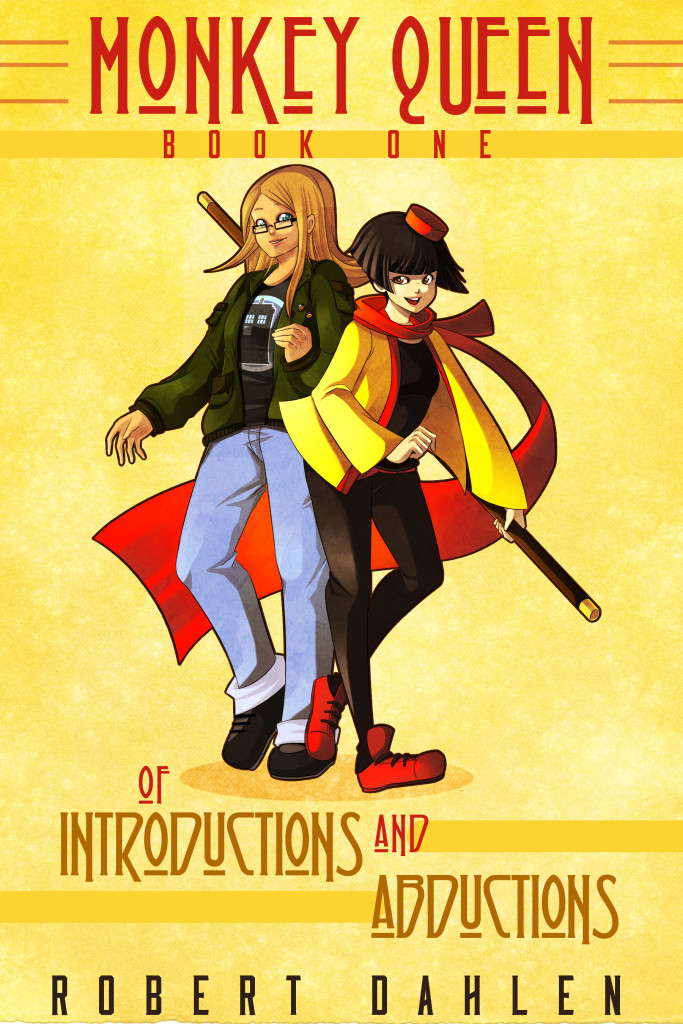 Tagged as Of Introductions And Abductions, sale!, Summer Sale

Tanabata! Get A Tiding Of Magpies on sale! 99 cents US!

It’s the seventh day of the seventh month! It’s Tanabata! It’s Qixi! Today is the day to join Michiko and Beth as they race to reach the Bridge Of Magpies in their latest adventure! And you can get the fourth Monkey Queen book, A Tiding Of Magpies, for just 99 cents US, 0,99€, £0.99, and marked down at all Amazon stores worldwide! And don’t forget that the first Monkey Queen book, Of Introductions And Abductions, is still on sale as well, for the same price!

Since Tanabata is, at its heart, about love, Michiko asked if she could share some of her favorite love songs! Find some classic (and some obscure) pop gems (it’s what she likes) after the cut! END_OF_DOCUMENT_TOKEN_TO_BE_REPLACED

Tagged as A Tiding Of Magpies, Michiko's favorites, Of Introductions And Abductions, qixi, Summer Sale, tanabata

someone to blog beside him, and you just may be the one

First off, don’t forget that there are two sales on Monkey Queen ebooks going on right now! A Tiding Of Magpies, the newest book, is just 99 cents US, to celebrate 7/7 and Tanabata, through this Wednesday, July 8! And Of Introductions And Abductions, Michiko and Beth’s first adventure, is 99 cents US through July 15! They’re available exclusively at Amazon, on sale at Amazon stores worldwide, and free to read with Kindle Unlimited! More after the cut. END_OF_DOCUMENT_TOKEN_TO_BE_REPLACED

Tagged as A Tiding Of Magpies, Darksbane Books, love is for everyone, love wins, Mr. Holmes, Of Introductions And Abductions, Sir Ian, Summer Sale, tag overload, tanabata, The Journey Of Earth, Willow

Tanabata sale! Get A Tiding Of Magpies for 99 cents through July 8!

“Anyone could see why the gods wanted today to be the day that Jiao and Yun got engaged,” Beth said. “It’s the seventh day of the seventh month, the day the author and the archer were reunited. It’s Valentine’s Day here. It’s Tanabata. It’s Qixi. And this—” She swept her arm out. “It’s the Bridge of Magpies. The bridge of birds. Built on love and hope. And that’s why I wanted to bring you to this place on this day.”
July 7 is coming! The seventh day of the seventh month! Tanabata! And to celebrate, we’re holding a flash sale, starting now! Get the fourth Monkey Queen book, A Tiding Of Magpies, for just 99 cents US, 0,99€, £0.99, and marked down at all Amazon stores worldwide! Look for this gorgeous cover by Willow! And don’t forget that the first Monkey Queen book, Of Introductions And Abductions, is still on sale as well, for the same price! 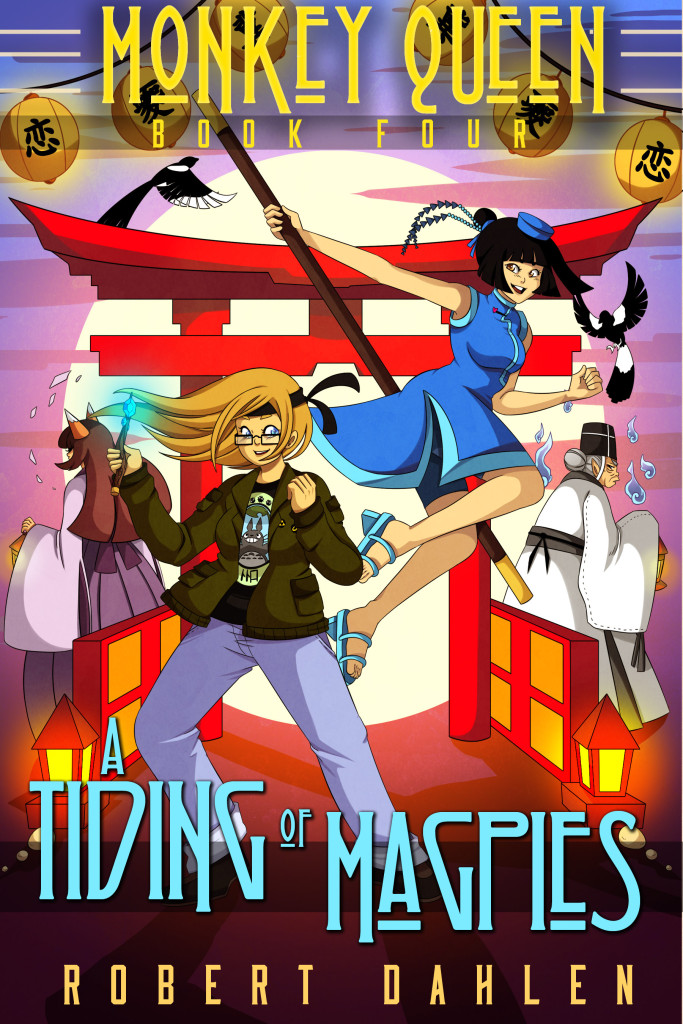 “One for sorrow, two for joy.”

When Jiao, a princess from Faerie’s Far Lands, comes to the Wonderland Diner and Tavern looking for help, it’s showtime for the teen hero called the Monkey Queen! Michiko and her best friend and partner in adventure, college student and geek girl Beth McGill, have to rescue the princess’ boyfriend from the minions of a scheming warlord, and then race against time and fend off goblins, ogres and monsters to reach the Bridge of Magpies by the seventh day of the seventh month to fulfill a prophecy.

But Michiko has been hiding something from everyone, even Beth, and no secret is forever. And when that secret is revealed…

Everything will change for Michiko and Beth.

Read Chapters One and Two here, and an excerpt from Chapter Four, “The Author, The Archer, And The King Of Magpies”, here!

Tagged as A Tiding Of Magpies, Of Introductions And Abductions, qixi, Summer Sale, tanabata

The Monkey Queen Summer Sale is on!

We’re starting summer (or winter for some of you) off with a bang! If you haven’t read the first Monkey Queen book, Of Introductions And Abductions, it’s now on sale for 99 cents US, 0,99€, £0.99, and other reduced prices on Amazon through July 15! We’re now available only on Amazon, for Kindle devices and apps, and part of Kindle Unlimited, so KU members can read all four Monkey Queen books free! Just search your local Amazon or Amazon.com for “Monkey Queen”!

And we’ll soon be announcing sales for the other three Monkey Queen books – The Brigadoon Boondoggle, Under The Stars Of Faerie and A Tiding Of Magpies! Check back here for more details, like us on Facebook, or sign up for our mailing list for the latest updates! 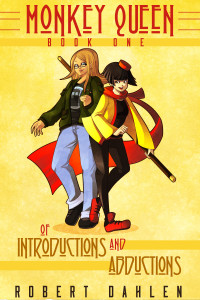 Tagged as Kindle Unlimited, Of Introductions And Abductions, Summer Sale