Tag Archives: Under The Stars Of Faerie

Behind The Scenes: Under The Stars Of Faerie

It’s Monkey Queen anniversary week! We’ll be celebrating all week with a look behind the scenes at all four Monkey Queen novels and much more, and we’re up to book three, Under The Stars Of Faerie!

This came about when two different plot ideas merged together. One was the concept of a mad gremlin kidnapping Mandy, and Mec coming to the rescue along with Michiko and Beth. The other was inspired by my fondness for the Northern California Pirate Festival, and earlier ideas I’d had but never used for stories about airships. I was lucky enough to figure out how to blend the two, and I’m happy with the result.

I’ve become quite fond of The Blade Of The West Wind and her crew. They may not be quite piratey, but they were still a blast to write. If I can ever perfect the 48-hour day or get my hands on a TARDIS, I just might write more with them. And I was quite happy with how Mec developed as the story went along; he is definitely one of my favorite supporting characters.

Favorite Line: Beth’s comment, “Time may heal all wounds, but chocolate can make a great bandage.” It should be a t-shirt, shouldn’t it?

Favorite Reference: I wrote the bit with Beth running back to grab a towel on March 11, 2014…Douglas Adams’ birthday. Second is a tie between Rosie (look up “Rosie the Riveter” sometime) and Old Fred (who apparently changed jobs after helping to save Pepperland).

Most Obscure Reference: As I was working on this book, some friends of mine on Facebook were posting weird album covers. One of them (actually an EP) was by a 1960s Swedish instrumental band, who were depicted as astronauts. The EP title was… The Impertinent Spotnicks in Jazzland. I could not resist.

Did you know: “Best Christmas Ever!” probably deserves its own Behind The Scenes. Look for it on Black Friday. Read it here in the meantime, or click the “short story” tag to read them all!

Tagged as anniversary week, Under The Stars Of Faerie

both the times she blogged, it was the rising of the sun

Don’t forget – US readers can still get the third Monkey Queen book, Under The Stars Of Faerie, for 99 cents at Amazon.com! This is a Kindle Countdown deal, and it ends at 11:59 PM PST on Wednesday, July 29! We’ll have more details this coming week on a special sale for all non-US Amazon stores! More after the cut. END_OF_DOCUMENT_TOKEN_TO_BE_REPLACED

The Summer Sale: Get Under The Stars Of Faerie for 99 cents US!

Beth could see the terminal, the other airships, the gloriously clear sky above, and Dawnhome below her, and she tried to take it all in, remember it all. She noticed the young pixie from the elevator was near her, sitting on her father’s shoulders, beaming with joy. Then, she looked at Michiko, standing next to her, and saw that her friend’s smile mirrored the young pixie’s, and her own. “You were right!” Michiko said. “This is awesome!” Beth nodded, too happy and thrilled to speak, as Folly’s Flight climbed, banked left and headed north.

The countdown is on…again! US readers can now get the third Monkey Queen book, Under The Stars Of Faerie, for 99 cents at Amazon.com! This is a Kindle Countdown deal, and it ends at 11:59 PM PST on Wednesday, July 29, so don’t wait! And look for this wonderful cover by Willow! 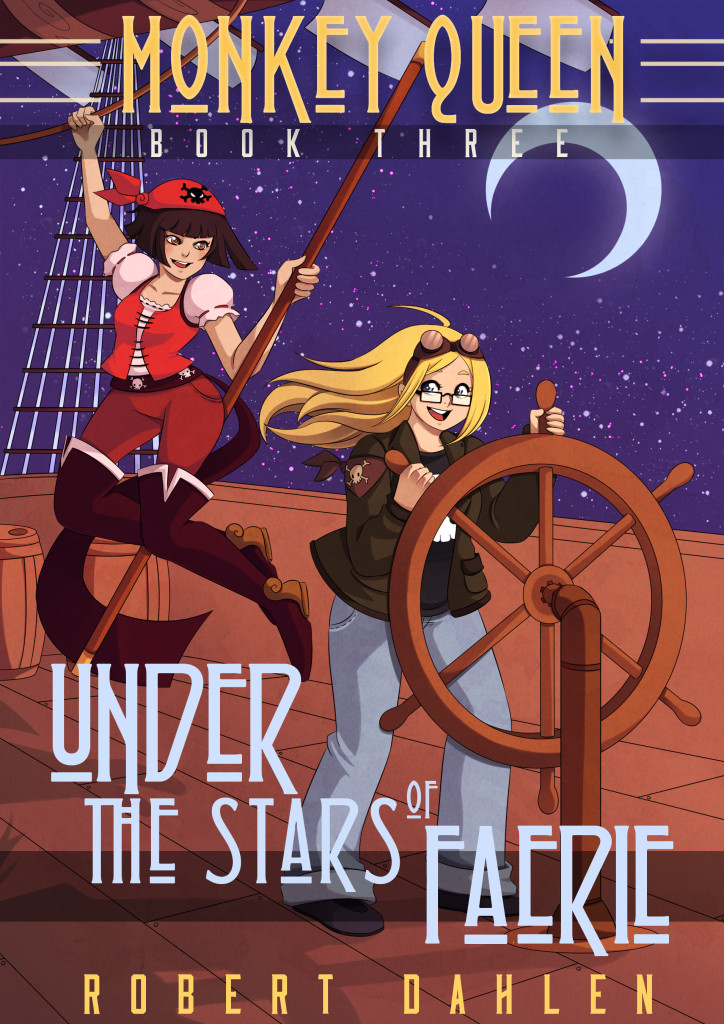 “You were right about her. She is a hero.”

When a love-crazed gremlin kidnaps pixie waitress Mandy, Michiko Koyama, a.k.a. the Monkey Queen, and her partner in adventure Beth McGill journey to Faerie to rescue their friend. Circumstances force them to ally with the crew of a pirate airship, led by the mysterious Captain Ash. Dangers await them in the sky, on the ground and in their hearts.

And an old enemy waits for them, his trap set and ready to be sprung…and it could mean the end of the Monkey Queen.

Tagged as sale!, Summer Sale, Under The Stars Of Faerie