they tell me there’s a lot of fish, blogging in the deep blue sea

First, a plug for a friend: Shei Darksbane, the co-founder of Darksbane Books, is getting ready to launch their first titles, Shei’s urban fantasy Awakened, and the space opera Destiny Abounds by her wife Annathesa Nikola Darksbane. You should head to their website now and sign up for their mailing list so you can be the second one to grab their books when they’re released (second since I’ll be trying to be the first). I’m biased, since Shei is an awesome pal, but I’m also excited for them both. Go! We’ll be here when you get back.

More after the cut.

Only two days left to jump on the Doubleclicks’ Kickstarter for their new CD, President Snakes! They’ve achieved the awesome stretch goal of getting Aubrey an electric cello, which enables them to cut touring costs considerably, but they have another cool stretch goal coming up – Angela starts a gaming podcast! And they make great music, so they deserve your support.

So I just learned now about Lego Dimensions, and as a Disney Infinity collector, I have to express my disappointment. Not with the game, since I don’t play them anyway, and definitely not with the selection of characters. But the figures look like the standard Lego figures except bigger, and I hate that. I know it’s part of the Lego look, but I would have loved to have seen Infinity-style figures of Gandalf and the Twelfth Doctor and even Bart Simpson, and now those are off the table. (But I’ll hold out hope for Harry Potter…)

Speaking of Twelve, his Lego Dimensions play set comes with…K-9. Huh? I mean, we all know that Ten got along fine with K-9, and Eleven would have loved having him around. But I suspect that Twelve’s reaction to K-9 would be, “Who brought this bloody robot dog onto my TARDIS?”

And finally, as long as we’re timey-wimey: Here’s the view of what one section of my desk is like four books in. And with Thorin off to greener (OK, more like golden-er) pastures, there’s a new bodyguard in town: 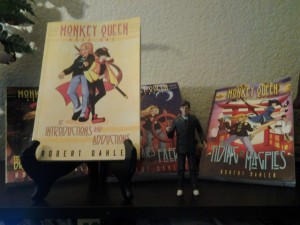 I assume Ten is about to assemble a cabinet at me.