so you better get ready, we may be blogging to your town

It’s our last Sunday catchup before the New Year’s! I wanted to take a moment to thank all of Michiko and Beth’s fans, casual or die-hard, those who are just discovering the Monkey Queen and those who have been with us from the start. Thank you! If you’re not busy New Year’s Eve and New Year’s Day, check back here; there may be a surprise or two for you!

After the cut: We get timey-wimey and Peanutty, and there’ll be some Monkeeing around.

I may have had my issues with Season 9 of Doctor Who, but there were many great moments, and everything came together nicely with the Christmas Special, possibly my favorite episode since “Day of the Doctor”. It was hilarious, touching, exciting, and even a bit heartwarming, and Twelve and River play nicely off each other. I just wonder what comes next…and when it’s coming.

The mystery resolved about the Sunday catchup post titles…all of them for nearly all of this year have been based on lyrics from songs by the Monkees. I adopted their music for Michiko’s ring tones (and a running reference) in part because their mostly upbeat pop fit her nicely and in part because I couldn’t resist the pun. It looks like all their albums can be heard on YouTube, so if you’re in the mood for some classic pop-rock, give them a try.

The tradition will continue in 2016 with a new musical artist. Who? you may ask. No, it’s not them…but this artist has been around almost as long, and actually has a tiny bit of geek cred. Tune in next week for more.

And finally, remember when earlier this year I used the “Peanutize Me” web site to Peanutize Beth and Michiko? If you’ve read Redblade, you’ve meet Abigail Main-Drake…and I also Peanutized Abby. 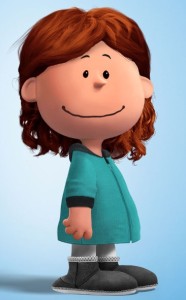