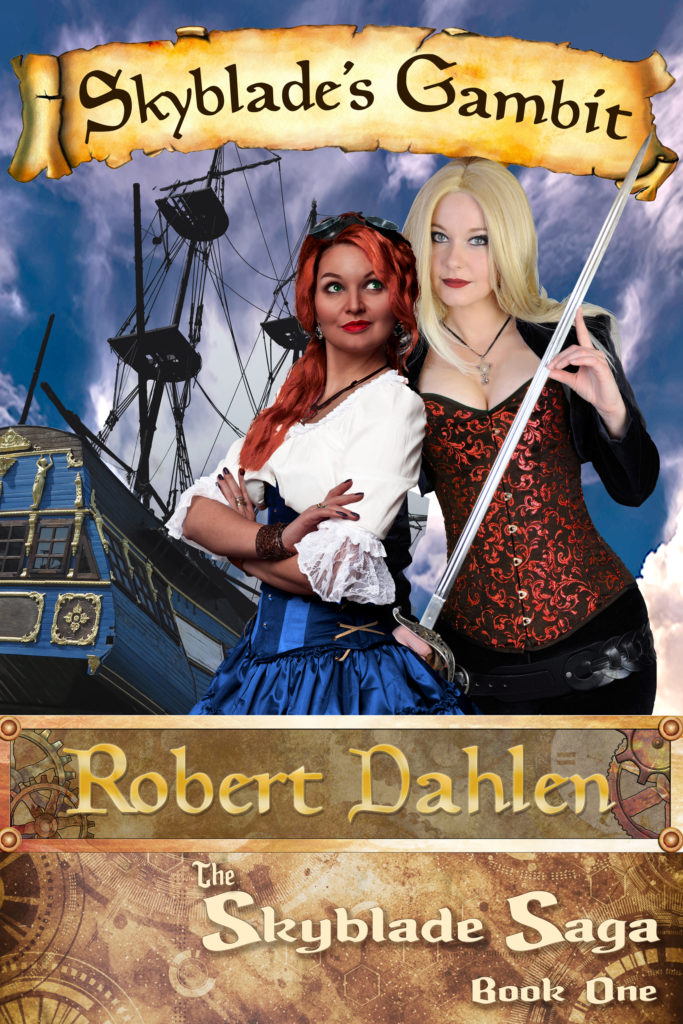 You can read a sample of the new edition of Skyblade’s Gambit on Amazon, including an expanded scene with Annabel in action. After the cut, you can read an excerpt from a new scene, featuring Victorie on the job. Enjoy!

A man in a black greatcoat brushed aside the straw that covered the crate’s contents. “Mead?” he said with a sneer as he picked up a bottle. “Hardly worth the effort to smuggle out of Svendar, Letticutt.”

“Master Wordyne…” The man who had ordered the crate to be opened absently rubbed his hands. “Perhaps you should dig a bit deeper, as they say.”

Wordyne grunted as he bent over the crate. He removed several bottles and tossed straw aside. There was a more satisfied grunt as he pulled out a pistolere. “There you are,” he said as he held it up, examining it closely. “Splendid worksmanship. How were you able to get these?”

Letticutt coughed softly. “One does not question these things, Master Wordyne. After all, I don’t question what use your men will be putting these to.”

“And if you’re wise, smuggler, you’ll keep it that way. The shot is there?”

“This’ll do. The agreed payment, then?”

“It depends. Are you expecting to take possession of the mead as well?”

Wordyne grinned. “Keep it. I may prefer Svendaran weaponry, but not their liquor.”

“A pity.” Letticutt smiled sadly. “I was hoping to offer it as a toast—”

“I’m afraid not. We’ll need that as evidence.”

The men all turned to see a woman striding down the street towards them. She was wearing a red tailcoat over a white blouse and black trousers; the coat had gold trim, and there were two stripes on each shoulder. She wore two overlapping belts; one had a scabbard that held her rapier, the other had a holster for her pistolere, though that weapon was in her hand. She was slender, with braided blond hair that went past her shoulder blades. Her eyes were gray and seemed to have the faintest twinkle, as if deep down, she found things endlessly amusing. “Navy,” Bert muttered half to himself, raising his prybar.

“You may want to think twice about that.” The woman pointed her pistolere at Bert. “Major Victorie Brassfeld. You are all under arrest for smuggling and purchasing smuggled goods.”

Wordyne glared at Letticutt. “What happened to your lookout?” he snapped.

“He had a slight accident.” Victorie smiled. The smuggler glanced past her and saw the lookout sprawled on the corner.

“Maybe it’s your turn for one.” Letticutt smiled. “You are rather outnumbered. Bert?”

The smuggler took a half step and waved his prybar. “I’ll teach you to mess with my pal—”

Victorie aimed her pistolere and fired. The shot tore into Bert’s forearm. He screamed in pain and dropped the prybar; it hit the cobblestone with a loud clatter.

Letticutt reached for the broadsword hanging from his belt. “We’ll have to pay to get Bert patched up now,” he growled. “Shall we take it out of her hide, Wordyne?”

Victorie could hear the footsteps. “A better question to ask…” She paused, enjoying the shock that was slowly spreading across the smuggler’s faces. “…might be, why did we assume that she came without any backup?”

© 2018 Robert Dahlen. All rights reserved, except for those protected by “fair use” laws where you live.