It’s been a while since I’ve done one of these posts. Let’s do this…after the cut! END_OF_DOCUMENT_TOKEN_TO_BE_REPLACED

Sunday is here, and I hope you’ll forgive me for starting off with a blatant plug. I have set up a page on Ko-Fi, where you can buy creative people a coffee (or, in my case, a cup of tea…or two donuts) by making a small donation. If you want to support what I do between books, this is one way to do so. More after the cut! END_OF_DOCUMENT_TOKEN_TO_BE_REPLACED

Sunday catchup, and I’ll start with this reminder I post from time to time: If you’ve enjoyed Copper Cove, or any of my other stories, would you be so kind as to leave a review somewhere? Reviews do help people decide if a book is for them, and increase its visibility. They’re one easy way to support any author whose work you enjoy, not just me. So, head over to Amazon, Goodreads, or your social media of choice and spread the word. Many thanks! More after the cut. END_OF_DOCUMENT_TOKEN_TO_BE_REPLACED

Sunday catchup! I’m back from Gaslight Expo 2017, rested and revved up for further writing and steampunk adventures! (Sorry about missing last week. The tea dueling started at a rather early hour on Sunday.) There’ll be a quick wrap up, and other things, after the cut, but this announcement first for those who might have missed it on social media:

Coming later this fall – the new Peavley Manor novelette, “The Missing Mallard (Or Duck, Macalley! Duck!)” The feathers will fly when Alice and Macalley get mixed up in a crazy yet sinister scheme! Stay tuned for more! END_OF_DOCUMENT_TOKEN_TO_BE_REPLACED

And Sunday catchup is back, with this reminder: Copper Cove is coming Tuesday, September 26! My newest book is a steampunk fantasy novella with adventure, romance and a great deal of tea! You can read an extended preview here, and preorder it through Amazon! More after this image, and the cut. 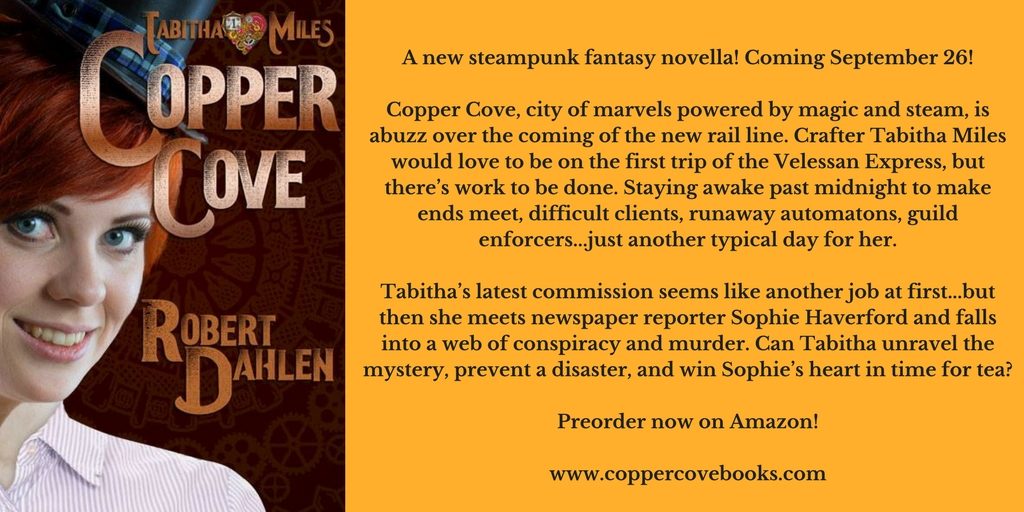 END_OF_DOCUMENT_TOKEN_TO_BE_REPLACED

always blogging in the same car

And Sunday catchup is back! My apologies for missing last week. I had two things going on – finishing the latest draft of Copper Cove, and trying not to melt during the monster heat wave that California had going over the Labor Day weekend. Holy cats, was it hot. There are a few goodies after the cut, but first, this update: Copper Cove has been sent to two beta readers; one has finished and given some useful feedback, and the other should be done shortly. The cover designer is hard at work. With any luck, I’ll be able to announce a publication date sometime this week. Click for more! END_OF_DOCUMENT_TOKEN_TO_BE_REPLACED

wait until the crowd blogs

Sunday catchup, full steam ahead! Work is continuing on Copper Cove, and though we don’t have First Draft Sign yet, that should only be a day or two away. I’ll keep you posted. After the cut: Where you can find me (or, places to avoid in the near future). END_OF_DOCUMENT_TOKEN_TO_BE_REPLACED

blogging glass in your room again

Sunday catchup, and again it’s going to be light, between working on Copper Cove and the fact that some of my future plans are still being finalized. I did want to let you know that later today, the ever-delightful Madame Askew will be doing Facebook Live videos from San Diego’s Steampunk Day At The Library! Click here for more info on the event, and here for Madame Askew’s Facebook page, where you can sign up to be updated whenever she and/or the Grand Arbiter go live!

This coming Tuesday will be a red-letter day for nerd music fans, as it’s the official release day for Love Problems by the Doubleclicks and Trust Issues by the PDX Broadsides! I’ll try to have reviews for both soon, but no promises.

And another one of nerd music’s bright lights, Meri Amber, is now doing regular live shows on Twitch! Follow her there to get updates as to when she’s on, or check her Twitter timeline.

And with that, tea and writing call. More later.

I must be only one in a million, I won’t let the blog pass without her

Sunday catchup, and if you missed it, scroll up or click back one post to learn more about Skyblade’s Claim, the new novella in the Skyblade Saga series – coming this Tuesday, June 27! There’ll be a preview with buying links up on Tuesday – but you’ll get to read the preview Monday evening if you sign up for my mailing list! Click here! (I promise that your address will never be sold or given away.)

More after the cut! END_OF_DOCUMENT_TOKEN_TO_BE_REPLACED